Termites are a pest that has often been ridiculed and detested for hundreds of years. Termites usually manifest themselves in colonies and work together to provide for their young while eating dead plant material. The main reason humans do everything they can to rid these creatures from their homes and other outbuildings is the termite’s insatiable appetite for wood. 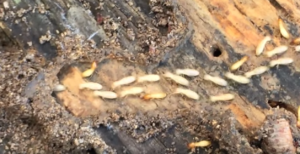 Termites Cause Millions of Dollars in Damage Annually

Termites can cause unprecedented damage to wood structures by devouring it. Many times when a hidden termite colony has been detected, a fair amount of damage has already occurred.

Subterranean termites find their origins in southern China. These particular termites have found their way to the Americas but are historically limited to the warmer southern regions of the United States. These “super termites” can eat and destroy wood at a faster pace than their commonly related cousins. Subterranean termites also normally build larger colonies as well. These large colonies can produce millions upon millions of young which in turn seek out palatable cellulose material to feed.

How Much Damage A Little Termite Can Do To Your Home

It is estimated that subterranean termites cost United States consumers a reported 4.5 billion dollars a year in an effort to rid or combat them. Causing damage to structures and trees themselves at an alarming rate is not the only concern, however. The overuse of termite pesticides can contaminate water supplies if not used responsibly. Termite extermination should always be handled by a professional, especially so if an infestation is anywhere near a water supply.

Termite Swarms
Termite swarms enable the colony to travel easily over distances and are identified by their wings. While looking similar to winged ants, there are subtle differences about them. Winged termites have a long and broad wing structure while flying ants have smaller wings and bent antennae. Subterranean termites like to enter homes through the ground in search of wood. This can cause issues in terms of early prevention. Because they like to burrow underground initially; a fair amount of damage may have occurred. Although the winged stage of the termite is relatively harmless in terms of causing damage, this is the time for them to mate and create a new wood-destroying colony. If there is any doubt whether or not termites are swarming in a particular area, it is best to consult a professional for an analysis.

Termite Treatment With Chemicals
Termite pesticides have long been the gold standard in regards to getting rid of these pesky insects. The common varieties of insecticides used to kill them are known as “termiticide”. These poisons are normally used to create a barrier of protection by being pumped into the ground effectively stopping the termite in its tracks. The major problem with using the older “termiticides” is the impact on the surrounding water supplies. Because of this, older chemicals have been widely accepted as being unsafe for the environment. Newer chemicals are available that have less of an impact and require much less volume of these types of products. What historically would take several gallons to do; now only require a few ounces where the newer chemicals are concerned.

Termite Bait Stations
Termite baiting takes a better approach to the infestation problem. Consumable material that the termite loves is used to lure the population away from the home or wood constructed outbuilding. The bait food is laced with chemicals that will kill the perpetrators while infecting the colony. Some of these baiting products are installed underground and away from the home while others are placed above ground and near the offending colony. In dire situations, a combination of both bait stations and liquid chemical treatments may be necessary. Your pest control technician will install a system that will keep your home safe and inspect it on a quarterly basis.

Your full-service pest control team can eliminate these pests as well as fleas, rats, and cockroaches.